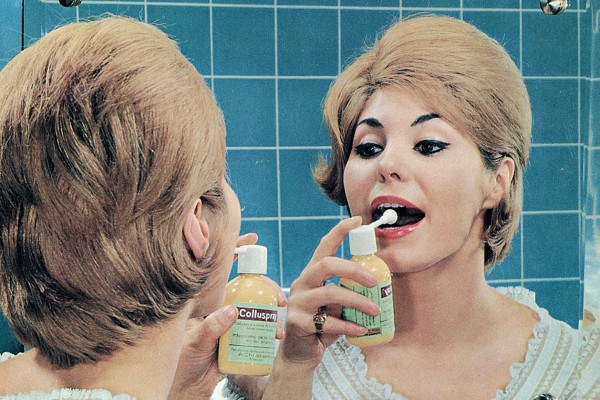 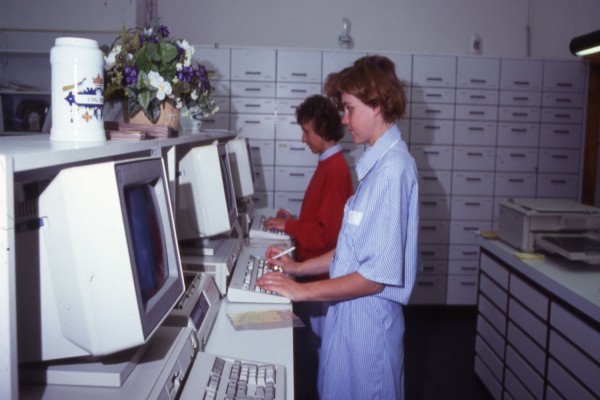 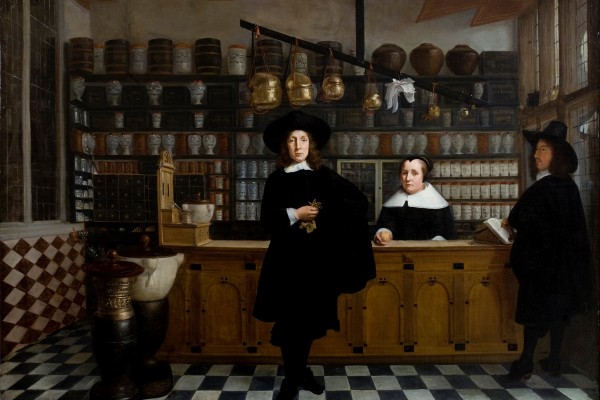 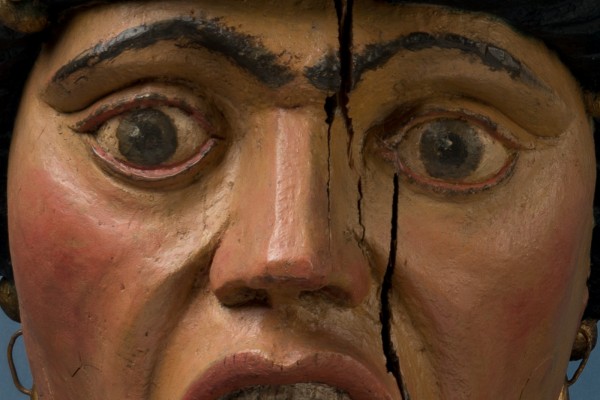 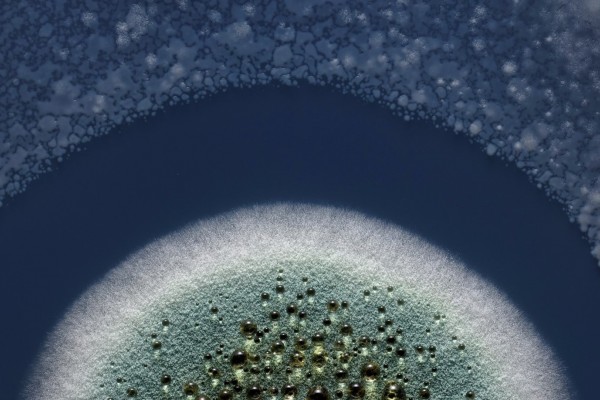 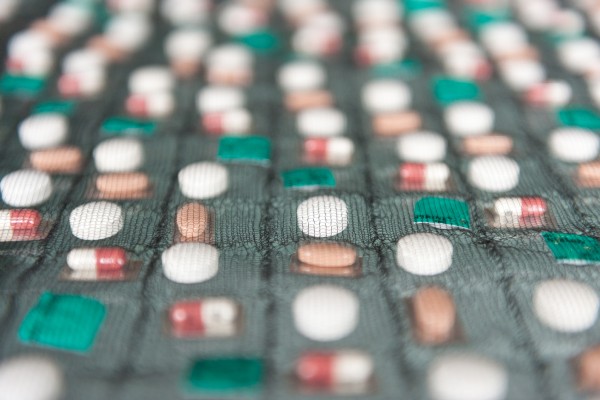 Wieg tot Graf (Cradle to Grave) displays the ‘medical biography’ of an ordinary Dutch man and woman. Together they swallowed more than 18.000 prescription medicines in the course of their lives. All these medicines are on display on the six meter long table. Stitched in place in the exact order of use. In this way Cradle to Grave casts a new light on the life of the Dutch from the perspective of drug use.

Next to the ‘pill timeline’ photos from family albums and all kinds of objects are on display. They are all related to recognizable social and medical events in our life: vaccinations, starting to smoke, getting married, having an ultrasound made, having children, an x-ray, retirement, getting glasses and a hearing aid. The photos belong to the artists, the exhibitors, their friends, family and colleagues. Together they form a more poetic representation of our good and bad times. This is how Cradle to Grave tells a life story that we can all recognize.

In her childhood the woman uses few drugs: she is given paracetamol for the occasional cold or fever and when she is ten, she is put on a course of antibiotics. She is also very healthy in the following years, except for a brief bout of diarrhoea for which she is prescribed codeine phosphate.

In her late teens the woman starts taking the contraceptive pill. In addition she takes the painkiller ibuprofen one day a month for menstrual cramps. After a few years she switches to a heavier contraceptive pill. She remains in good health, except for an infection with the sexually transmitted disease chlamydia. She is given azithromycin for that. She also has an occasional vaginal fungal infection for which she takes fluconazole.

In her twenties and early thirties she takes folic acid for several months to support a healthy pregnancy. She becomes pregnant twice, and continues taking folic acid in the first three months of pregnancy. Once the baby is born and she is breastfeeding, she switches to a lighter contraceptive.

In middle age, at around the time that her children leave home, she becomes depressed. To suppress her fear and anxiety she is prescribed a combination of a tranquilliser (diazepam) and a beta-blocker (propranolol). However, after some time she does need a longer course of antidepressants.

She recovers completely from her depression, but needs to take diazepam again when a mammogram during a routine check reveals a lump in her breast. It turns out to be breast cancer. The lump is surgically removed and after radiation therapy she receives daily chemotherapy for five years. At first this is in the form of tamoxifen tablets, but after some time she is switched to anastrozole. Because she experiences side effects, she goes back to tamoxifen after a short period.

Her breast cancer is cured and she is healthy for years until she develops diabetes in her seventies. As a result she has to take metformin up to three times a day to keep her blood sugar level under control. She also uses an ACE-inhibitor to lower her blood pressure, an aspirin and a cholesterol-lowering drug (statin) to lower the risk of complications from her diabetes. She is still vital at the age of eighty.

As a child the man is generally healthy: he is sometimes given a paracetamol against fever or headache and very rarely antibiotics against a bacterial infection. He also has the viral infection croup twice, for which he is given dexamethasone tablets. As a teenager he develops hay fever and has to take drugs regularly every spring and summer to suppress his allergy.

In his teens he is again given antibiotics for incidental bacterial infections, including chlamydia, a sexually transmitted disease. He starts to smoke at the age of eighteen and, after several attempts to quit, only manages to do so in his seventies. As a result of years of smoking, he is susceptible to bronchial infections, for which he is given antibiotics.

In his thirties and forties he suffers from migraine, trying several different treatments. He also takes regular anti-inflammatory drugs to stop the headaches, and as a result he has recurring stomach problems for some years, for which he also takes medication.

To celebrate his sixtieth birthday he goes on holiday to Kenia and is given a preventative course of the anti-malarial Malarone®. He is remarkably healthy in the years afterwards. In his late sixties he develops high blood pressure, for which he has to take a daily diuretic tablet for some years. Ultimately, he also has to take an ACE-inhibitor to better control his blood pressure. Later, he is prescribed a cholesterol-lowering drug (statin) against too high cholesterol levels. To prevent thrombosis, he also has to take a low dose of aspirin. So, at this time he takes four pills per day. He finally manages to stop smoking.

At the age of 75 his stomach pain acts up again. He takes medication for this, but after a week he has a heart attack: the pain turned out not be related to his digestion, but was chest pain. As an emergency treatment for the heart attack he is given a high dose of aspirin. He has to go to hospital immediately. After a week he is released and is prescribed a number of pills to minimise the risk of a second heart attack. This involves the low dose of aspirin, the statin and the ACE-inhibitor he was already taking, as well as a beta blocker and clopidogrel, a drug to prevent the formation of small blood clots. He sticks to this regimen until at the age of 76 he suddenly dies from a severe stroke.

The installation Wieg tot Graf (Cradle to Grave) was commissioned by the Art and Public Space Foundation from the British artist collective Pharmacopoeia. Previously they made the artwork Cradle to Grave with a focus on the British context commissioned by the British Museum. Wieg tot Graf was shown for the first time during the public art event Niet Normaal, which took place from 16 December 2009 to 7 March 2010 at the Beurs van Berlage in Amsterdam. After the manifestation, the Medicines Evaluation Board (MEB) took care of the installation. 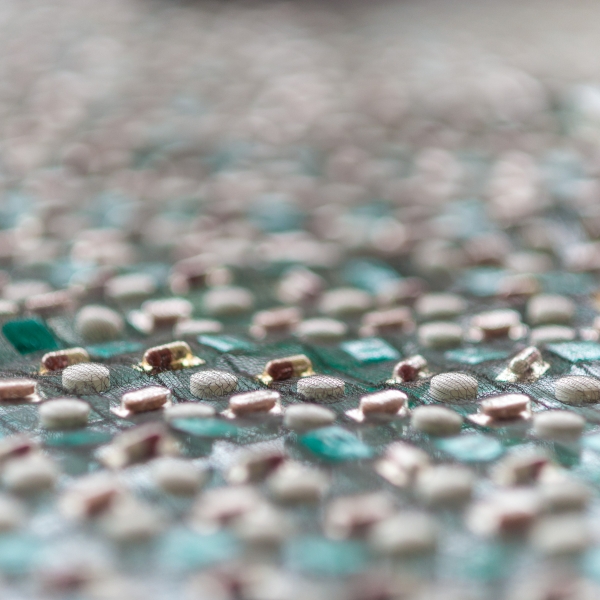 Every medicine is different. Which medicines are part of Cradle to Grave and what are their effects? 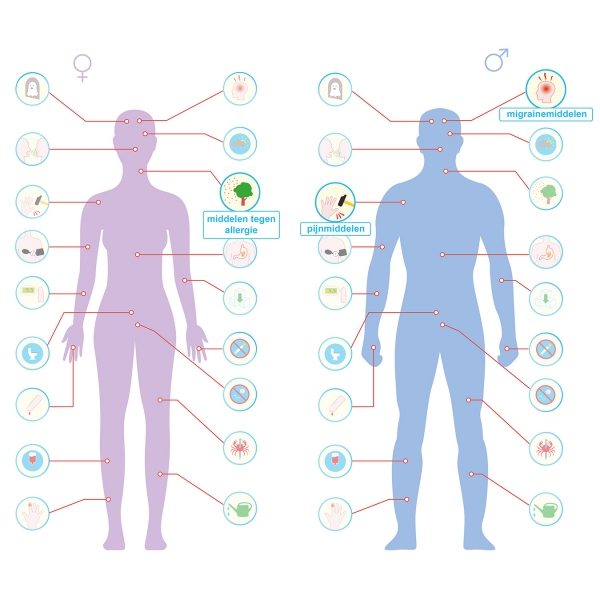 Information about medicines and their use is often complex. How can visual language provide a solution?